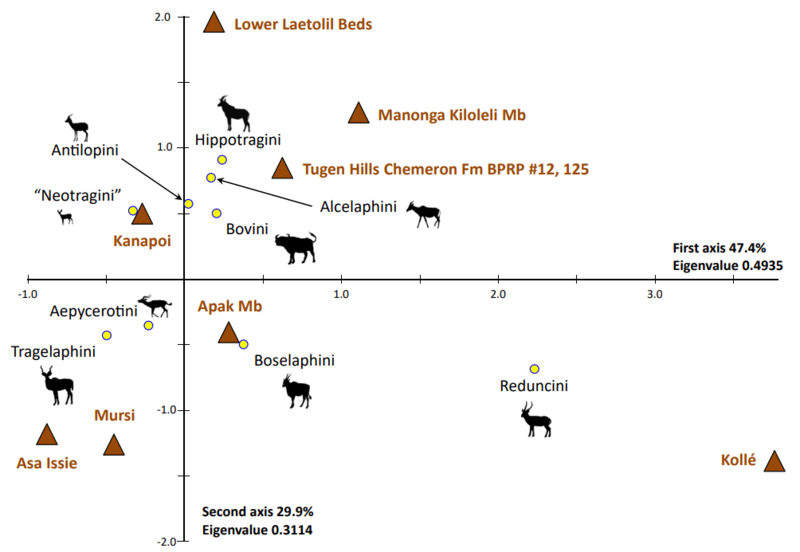 Australopithecus anamensis is a pivotal species in human evolution. It is likely to be the direct ancestor of Australopithecus afarensis and the species that may have given rise to the Homo and Paranthropus lineages. It had a suite of adaptations for habitual bipedalism and a diet that differed from that of earlier hominin species. Under what environmental and ecological conditions did this suite of adaptations arise? The early Pliocene site of Kanapoi in the Lake Turkana Basin of Kenya has the largest sample of A. anamensis in eastern Africa and a rich record of fossil vertebrates. Most Kanapoi fossils are chronologically well constrained by radiometrically dated tephras between the ages of 4.2 and 4.1 million years ago. Sedimentological, isotopic, and faunal data indicate that the environments of Kanapoi during the early Pliocene had a complex range of vegetation types that included closed woodlands, shrubs, and grasslands near a river (for most of the sequence) or lake. These were dynamic landscapes that could shift rapidly from fluvial to lacustrine conditions, and then back. Australopithecus anamensis shared its environments with at least 10 species of very large herbivores, which undoubtedly played a major role in modifying the landscape by opening wooded areas and providing pathways for bipedal hominins. Hominins may have competed for terrestrial resources with abundant suids (Nyanzachoerus and Notochoerus) and for arboreal resources with monkeys (Parapapio being the most common cercopithecid). Kanapoi had a formidable group of predators that included a very abundant species of hyena (Parahyaena howelli), two sabre-tooth felids (Dinofelis and Homotherium), a giant otter (Enhydriodon cf. dikikae), and three species of crocodiles. Various measures of abundance indicate that A. anamensis was an important component of the Kanapoi early Pliocene ecosystems, and that its key adaptations allowed this species to thrive in complex and dynamic landscapes.