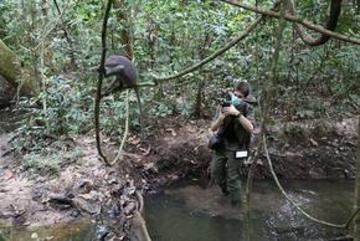 I grew up in a small town in rural East Germany, and there was very little input regarding what to study and what eventual career pathways would look like. Unlike many of my colleagues, I did not plan to end up studying primates and rather incidentally ended up where I am now. I was interested in the humanities but was advised to avoid them for financial reasons. Psychology seemed to promise some interesting courses and a good career perspective, and I managed to secure a place in the Free University Berlin for my undergraduate degree. Over the course of my BSc, I became increasingly interested in biology and evolution, and I was fortunate enough that the university created a faculty position in Evolutionary Psychology around the same time as I started there. This allowed me to do my final project on the evolution of play and humour, a topic that I am working on again nowadays. The project saw me sit around a zoo and film chimpanzees for days at a time, which got me hooked. I also secured a research assistant position studying facial expressions in humans at the Max Planck Institute for Human Development in Berlin. There were no master-level courses on evolutionary psychology or the evolution of cognition in Germany at the time, so my undergraduate advisor counseled me to go to St Andrews, Scotland, and continue my studies there. The MSc on Evolutionary and Comparative Psychology there confirmed not only that I actually liked thinking about animals more than about human cognition, but also that this is potentially a career option rather than just a gimmick. I was able to go to Budongo Forest, Uganda, for my final project, spooking blue monkeys with a loud speaker, recording their alarm calls, and developing a computer algorithm to identify individuals by their voice. I had not received any training in programming or working with animals, so this mainly involved teaching myself how to get the computer to do what I wanted it to, and it surprisingly worked out. The fact that I got field experience during my MSc was helpful, as many PhD positions in field primatology require previous field experience, and I wanted to keep running after monkeys in a rainforest despite not having a biology background.

In 2012, I started a PhD in the former primatology department in the Max Planck Institute for Evolutionary Anthropology in Leipzig, Germany, working in the Taï Chimpanzee Project in Côte d’Ivoire. My project involved the comparison of sooty mangabeys and chimpanzees in the wild, mainly regarding the social interactions that individuals use to make friends and navigate their social world. Groups of both species are habituated to human observers, so one is very close to the animals and gets to know them very well in their daily struggles. Field work turned out to be harder than expected, and I initially struggled with a number of tropical diseases (I guess that’s why they require you to come with some field experience), but I managed to spend some 3 years with the animals and enjoyed the work. I finished my PhD in 2018 and stayed on in Leipzig for a short postdoctoral position after, before being offered a postdoc in the Psychology Department of the University of Portsmouth, UK. In Portsmouth, I mainly did a lot of statistical programming (the bane of modern biology), developing a statistical package that facilitates the analysis of facial expression data. I secured a Newton International Fellowship from the British Academy shortly after and came to Oxford, to study play behaviour in chimpanzees.

As I said earlier, my pathway was not particularly well-planned, but I have always benefited from advise that people have given me. In sharing these stories, we hope to encourage others to see the study of primatology and human evolution as valid career paths, and show that there is not just one way to get into academia. If you have any questions about field primatology, evolutionary psychology, grants, or career development, please contact me: alexander.mielke@anthro.ox.ac.uk.