Monkeying Around: Complexity, Cognition, and Culture in Primate Play 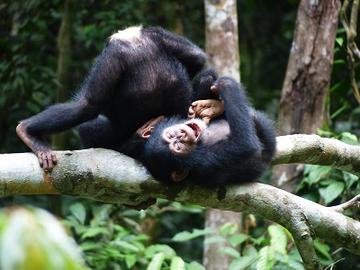 Led by post-doctoral fellow Alex Mielke, the goal of this project is to use the complex rules of chimpanzee play as a tool to understand chimpanzee cognitive skills. In the quest to compare the cognitive abilities of humans and other species, especially apes, researchers have long relied on experiments in captive populations. However, these experiments often feature situations that are highly unnatural for the involved animals. One context in which cognitive abilities could be tested in a more meaningful way is play. The play of nonhuman primate infants and juveniles strongly resembles that of human children in form and function, allowing us to test their cognitive development using natural observations. We do not yet have a framework to quantify the cognitive complexity of sequences of behaviour in other animals. Play involves fast-flowing, rule-based exchanges of actions of multiple players, and we will study repeatable patterns (“games”) in hundreds of hours of video-recorded play bouts of wild chimpanzees. This will allow us to study a range of cognitive skills that have thus far been deemed uniquely human. Specifically, we will test whether the rules of games grow more complex as individuals grow older, how flexible individuals are in combining different elements and games, and whether developmental trajectories are the same across individuals. We will be able to investigate how well players synchronise their actions, and if synchronicity is aided by the ability to swap roles during cooperation and to read the intentions of other players. Finally, we will test whether new play traditions are invented, how individuals learn them, and how they spread, to investigate if there is something like play “culture” in communities. By collecting video material in a captive chimpanzee community and comparing the results to the existing video archive, we will test whether captive individuals pass through the same developmental stages as their wild cousins, whether their play complexity is similar or impoverished, and whether we can use play as a marker for well-being. This will help us identify individuals with welfare concerns early on and allow for targeted enrichment interventions. This project is funded by the British Academy Newton International Fellowship.