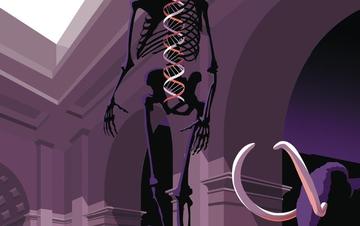 Illustration by Pascal Blanchet in "How Scientists Discovered the Staggering Complexity of Human Evolution", published in the 175th Anniversary Issue of Scientific American by Kate Wong

In a fascinating article, "How Scientists Discovered the Staggering Complexity of Human Evolution", published in the 175th Anniversary Issue of Scientific American, Kate Wong highlights the Paleo-Primate Project Gorongosa (PPPG), led by Dr Susana Carvalho, Associate Professor of Paleoanthropology at the University of Oxford’s School of Anthropology and Museum Ethnography.

After describing major fossil discoveries made after the publication of Charles Darwin’s On the Origin of Species in 1859, Wong notes that, in spite of all the paleontological studies conducted in Africa, one of the main gaps remaining in our knowledge of human evolution is surrounds the last common ancestor of humans and the genus Pan that includes modern chimpanzees.

Wong’s article explains that "Insights may come from a project currently underway in central Mozambique, where Susana Carvalho and René Bobe of the University of Oxford and their colleagues are hunting for fossil primates, including hominins, in sediments older than the ones that yielded Sahelanthrophus, Orrorin and Ardipithecus".

The Paleo-Primate Project Gorongosa, in Gorongosa National Park, Mozambique is currently studying the fossils discovered in the Urema section of the East African Rift System. These fossils fill a major geographic and temporal gap in our knowledge of primate evolution in Africa.