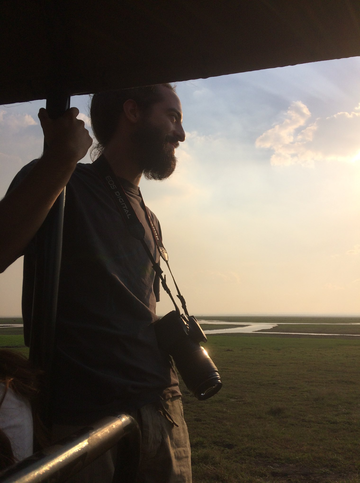 We are the sum of our circumstance, and I was tremendously lucky to grow up with a father that made me obsess with music, cinema, and mathematical/logic games, a mother that not only contributed to most of my character, but also guided my diving into poetry, literature, and languages. As well as an older brother that taught me how to build websites and use photoshop since I was 8 years old (which are still my most useful skills), and introduced me to the hip-hop culture even earlier (which is still my greatest passion). I spent most of the first 18 years of my life in Ansião, a small town in the centre of Portugal. Thus, I did all my pre-university education in the public schools there, but I must confess I was far more interested in rap and graffiti, skateboarding, insect photography, fossil hunting (mostly ammonites), and the development of cyberspace and its communities. In fact, I had little to no interest in continuing studying and going for a degree at that time. It took a lot of arguing and discussing with my family. And I finally decided to go with their plan and settled for something that I thought I might enjoy – Anthropology, at the University of Coimbra. Previously, in school, my favourite topics were biology, history and geology, and when I looked at the BSc in Anthropology’s programme, everything just kind of clicked.

I moved to Coimbra in 2010, and I had the unbelievable luck of immediately meeting a group of students that up to this day are still among my best friends. The more I think about what we all have in common, I guess it is an inordinate fondness for discussing natural history. Meeting the mosaic offered by the inescapable bohemian lifestyle in Coimbra, combined with facing many new concepts and hypotheses from a scientific field I knew so little about, made me instantaneously fall for the trap of the academic world. Then, I had this course – palaeoanthropology – that completely blew my mind, everything I thought I knew about human evolution, was but a grain of sand in the dunes of knowledge. But even these dunes I could now perceive were part of an immense desert with many uncharted territories. I become entranced by the voids of time and space that mutilated our ability to fully understand evolutionary events. When my professor showed a map of all hominin fossils found throughout Africa, my first thought was “wow, there are gaps everywhere!” – and the most striking one was Mozambique. That fact never abandoned my mind. Nevertheless, everybody in my class was trying to convince each other that becoming a paleoanthropologist was next to impossible, and that most fossils of importance have already been found. On my side, I must confess that such negativity never worked as good fuel for motivation. So, I was that one fool that did not listen to the “realistic talk” of everyone else.

On the last year of the undergraduate programme, I attained an Erasmus programme scholarship and spent a full academic year (2012/13) in Reykjavik, Iceland, studying at its major university, Háskóli Íslands, and that was one of the best experiences of my life. The diverse selection of courses I took (archaeology, ecology, exobiology (!), Nordic folklore, cinema, statistics, etc), tied with the never-ending nights of the Icelandic winter roaring with mind-bending auroras that danced through the skies, made me reconnect with learning. This was the first time in my life when I really enjoyed studying. Because of this, I also started travelling a lot more and broadening my horizons. It’s an experience I highly recommend to everybody. Some listened. They are now recommending it as well. Erasmus is like a cult, I guess, but a good one!

Then I went back to Portugal, invested in the idea of continuing my studies, and Coimbra’s magnet started pulling me again. I was kind of split between following a specialization in biological or in social anthropology (the undergraduate I did before was 50/50 and my favourite course was Culture and Cognition, from the social side). However, I kept on remembering how much I loved the geology field trips in high school, and the possibility of working in fossil sites for a living did not leave my dreamy head for a second. Even if the chances were extremely small of following such a career, I was going to bet all on it. So, I ended up choosing the Human Evolution and Biology master’s degree in the University of Coimbra. During this time, I was enjoying studying a lot more, and was able to consolidate my knowledge thanks to all the amazing professors I had. In parallel to this, I co-funded the osteomics.com start-up venture with some friends and colleagues, we secured some funding prizes and grants, but eventually we transformed it into a non-profit website that is still available now with machine learning tools for biological anthropologists. For my master thesis I worked with Dr. David Gonçalves and Dr. Eugénia Cunha on heat-altered skeletal remains. I reinterpreted the warping and shrinking in human burnt skeletons under the geometric morphometrics paradigm, and that allowed me to better understand and quantify these phenomena. When I finished the masters programme in 2015, Professor Eugénia invited me to become part of the Laboratory of Forensic Anthropology (LFA).

The following 2 years I worked in the LFA, designed its logotype, built its official website, co-wrote a few papers, and created many webapps for estimating the biological profile in skeletons that are available in osteomics. But from the very beginning I told Professor Eugénia that I was not really that interested in doing a PhD in forensics, but instead I’d rather prefer to do something related to human evolution. At that time I discussed some ideas I was interested in with Professor Eugénia, including the fossil record gap at Mozambique and what could perhaps be done, and by some unbelievable coincidence, she told me she was actually involved in a scientific project that was starting there! That was when I got into contact with Professor Susana Carvalho who introduced me in detail to the Paleo-Primate Project Gorongosa (PPPG) and what they were trying to accomplish. In 2017, I guaranteed an FCT scholarship to study at Oxford, and got admitted at the university to start a DPhil programme under the supervision of Professor Susana Carvalho and Professor Robert Anemone. My research topic is about understanding how fossil sites can be discovered in an objective way, and I’ve been developing machine learning and remote sensing tools using satellite data to accomplish that.

What happened next was all too recent to judge clearly. But I guess it has been a run of drawing check marks on my dreams-to-realize list. I’ve had the amazing opportunity to do field work and research at the Gorongosa National Park, in Mozambique a couple of times, working with the amazing PPPG crew and looking for and ending up finding new fossil sites that I believe are of tremendous importance for the understanding of Gorongosa’s evolutionary history and past ecosystems. Moreover, I had the chance of travelling a lot and to many countries I’ve never been before to present my research at spectacular conferences, and where I had great times and met some personal heroes! I’ve been part of the Koobi Fora Field School and that would require its own separate text to explain how awesome it was. And… much more happened, and I guess I don’t really know what’s happening next. However, I am deeply grateful towards all my family, for everyone I’ve met in my path and the friends I’ve found, especially those that collaborated with me in many projects over the years, and last but not least, to all my amazing colleagues at the primobevolab. I’m continuously learning a lot thanks to all of you, and you make my academic life in this “pale blue dot” infinitely better.