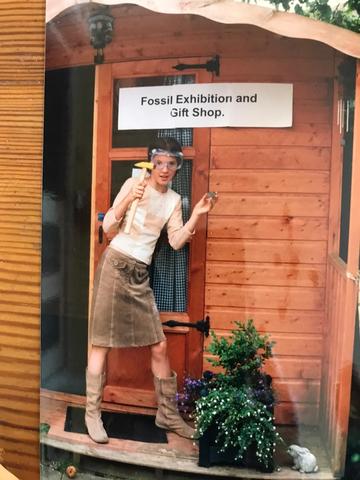 From a young age I have been interested in many different subjects and how they can be used together to try and understand the world. I had lots of dreams, including becoming a palaeontologist and rescuing orangutans in Borneo! When I was young I went on a family holiday to Charmouth where we found fossils for ourselves, and when I returned home I set up my own “fossil exhibition” in the garden shed. I had no idea that my love of primates and evolution could somehow be used together! I was particularly inspired by a talk from Chris Stringer at Bolton University in 2006; my Dad had seen it advertised and so he, my Mum, my best friend and I all went along. I bought a little notebook and wrote everything down, although I didn’t understand much at all!

I was incredibly indecisive in choosing my A-Levels, which might explain why I finally ended up with the unusual combination of Theatre Studies and Chemistry, alongside Maths and Biology. I also took English to AS Level, and General Studies.

I decided to apply for Psychology at university, as I knew I was interested in people, science and behaviour. I didn’t know enough about other subjects that could help me understand humans and draw on my other interests in animals and evolution. I went to Cambridge University in 2013 to study the Psychological and Behavioural Science tripos, in the first year it ran. The course was absolutely perfect for me- alongside Psychology I was introduced to Biological Anthropology where a whole world of primates, fossils and human evolution was opened up to me!

I decided to switch degrees in my second year, and so I graduated with a degree in Biological Anthropology. I took every module the degree offered and learnt about endocrinology, genetics, primates, models of human evolution, osteology, ecology and statistics. It truly was a perfect balance of everything I enjoyed. I also attended weekly seminars on other topics, and it was there that I heard Professor Matsusawa speak on chimpanzee cognition. I decided to email the Japanese sanctuary where the chimpanzees that he had spoken about lived, and to my surprise, they invited me for an interview to go there for an internship in my summer holiday. I had a fantastic time there and learnt so much about cognition, primate behaviour and how research is conducted in the sanctuary setting.

After my degree at Cambridge I felt well equipped with theory of human evolution and primatology, and had seen some real-life primates in Japan, but I really wanted to know more about fieldwork in the wild. I completed my MSc the following year at Liverpool John Moores University in Primate Behaviour and Conservation, which gave me fantastic exposure to the fieldwork setting. As a cohort, we went to Ugalla, Tanzania for 10 days to experience the environment and methods of fieldwork life. The ultimate highlight was walking several miles before sunrise to see a mother and baby chimpanzee waking up in their nest. While I was in Liverpool, I had been working on an idea with my previous supervisor from Cambridge, Professor McGrew, which became the basis of my first publication and MSc thesis. 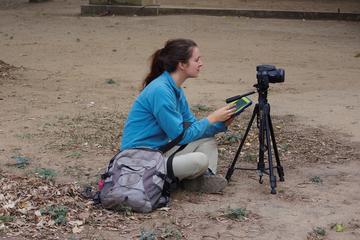 I knew I wanted to continue my research of wild primates, drawing on knowledge from across disciplines to answer questions of human behavioural evolution. The Primate Models of behavioural Evolution lab at Oxford has been the perfect place for me to undertake my DPhil as it is such an interdisciplinary research group. I rely so much every day on the knowledge of everyone else in the lab, and it is this collaboration that makes our work both possible and enjoyable. In particular, having help with how to finance my research has been invaluable. I have won several grants, including the Clarendon Scholarship to fund my DPhil, the Owen Aldis award for research costs and the Magdalen College Travel grant that contributed to my fieldwork costs. I have had a fantastic time in this research group, and in Oxford more generally, and I attribute this largely to the incredible people I have met. I have done more fieldwork on wild primates as part of my DPhil, this time on baboons in Gorongosa National Park, Mozambique.

As a student from a UK state school, I didn’t know anything about careers in academia, or even that these sorts of interdisciplinary subjects existed! I feel extremely passionate about sharing my experience in the hope it can help other young people explore their interests. I feel strongly that “non-traditional” subjects are not widely discussed with high school students, and certainly not in my experience of the UK state school system. It would be fantastic if we can reach more students by sharing our interests and experiences and making the whole system more transparent. Research in this area can be truly rewarding, exciting and important.

If you have any questions about my pathway into human evolution/ primatology, including coming into academia from a state school background, please get in touch! lucy.baehren@anthro.ox.ac.uk.