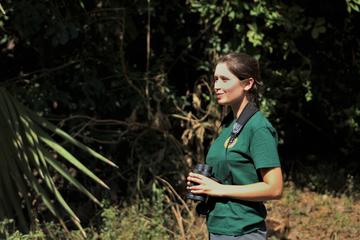 The sciences were my favourite subjects at school, so I chose to study triple science as one of my GCSE options and then A-Levels in Biology, Chemistry and Maths. I wasn’t sure what I wanted to do afterwards - I remember being interested in working with animals and becoming a vet, but then being put off when I discovered how many years of study were involved, which I find very ironic now considering the path I have taken!

Around this time the BBC were broadcasting a documentary series called the ‘Origins of Us’ which was all about human evolution and was presented by a Professor of biological anthropology, Alice Roberts. I found the show and the concepts it introduced me to fascinating and was thrilled to find degrees in anthropology whilst searching through university prospectus’ in the school library. After sharing my newfound interest with one of my teachers, I was encouraged to check out The Sutton Trust, an organisation which champions social mobility through free to attend programmes such as UK Summer Schools targeted at students from state-funded schools and less advantaged backgrounds. They were running a week-long summer school in Archaeology and Anthropology at the University of Cambridge to which I was accepted. The summer school experience and the access it provided was invaluable to me – not only did it confirm my interest in anthropology, it allowed me to connect with technicians and researchers who encouraged and supported me.

During that summer (and a number of summers that followed), alongside a trusty part-time job washing up in the local pub, I gained experience volunteering within Cambridge’s Department of Archaeology and Anthropology, initially shadowing the Laboratory Technician in the research group PrIME (Primate Immunogenetics and Molecular Ecology) and several years later spending a number of weeks working as a biological finds assistant for an archaeological research project.

After finishing my A-Levels, I studied a BSc in Biological Anthropology at the University of Kent. I had a fantastic three years in Canterbury, exploring topics such as human evolution, paleoanthropology, primate behaviour and communication, osteology, forensic anthropology, and paleopathology. I worked part-time during my course: a short (and not so successful) stint as a club promoter, followed by two and a bit years at a busy taxi company handling bookings, accompanied by several months as a research assistant for my dissertation supervisor in my final year. Though all valuable experiences, it was the latter which led me to apply to study an MPhil in Human Evolutionary Studies at the University of Cambridge, and after completion of this, a position as a research assistant in the Primate Models for Behavioural Evolution Lab at the University of Oxford. Though only part-time, I made the decision to move to Oxford for the position and supplemented my hours through working as a lab assistant based in Oxford's Centre for Clinical Vaccinology and Tropical Medicine. I'm very glad I took this path - I learnt a great deal about academic research during this year and was also lucky enough to travel to Japan as part of a collaboration with Kyoto University and CETBio to attend the Japan Society for the Promotion of Science's training programme for young researchers and observe captive chimpanzee research at the Primate Research Institute and Kumamoto Sanctuary. That autumn, I began my DPhil in Anthropology here at the Primate Models for Behavioural Evolution Lab, researching vervet monkey vocal communication in Gorongosa National Park, Mozambique.

I would not be in the position I am today without the encouragement, guidance, and support I received from others along the way. Through sharing my pathway, I hope to inspire others to pursue their interests, no matter their background, and put myself forward as a contact for anyone interested in pursuing studies in human evolution and/or primatology who would like advice or just wants to chat to someone who has been through the process themselves: megan.beardmore-herd@anthro.ox.ac.uk.