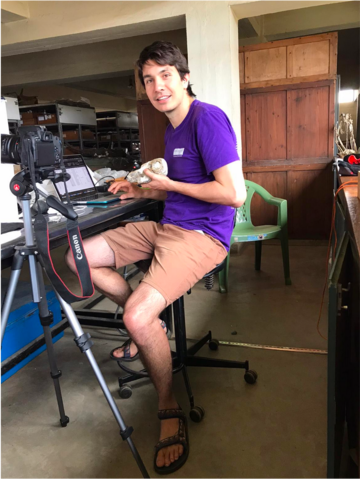 I grew up in Santiago, Chile but part of my family is from Southern Chile. This meant that we spent most of our holidays with my grandmother in the Chilean Lake District. There I would spend my days either reading (about dinosaurs which at the time were my only fascination) or visiting the neighbouring reserves and beautiful national parks. The lakes and ancient forests within this region, as well as the diversity of animals that inhabit it left a deep-rooted impression on me and contributed to my interest in the natural world and its history.

From some perspectives, the way in which I became a palaeoprimatologist and vertebrate palaeobiologist may seem less traditional. It was a gradual process of discovering where my true interests lie which was shaped by several decisions I took throughout my academic career. I have always had multiple and often very different interests, and it was quite difficult for me to decide which subjects to drop in high school and which others I would pursue (the Chilean high school system used to be such that you had to decide whether you wanted to follow a ‘scientific’ or ‘humanistic’ pathway, each one focusing on different subjects e.g., biology/chemistry/physics vs. literature/social sciences). These very broad interests I had were probably the main reason that led me to choose a degree that was wide enough in its scope to accommodate both a social and a scientific dimension.

My undergraduate degree was a 4-year long programme in Anthropology at the University of Chile. Given the characteristics of Chilean undergraduate degrees, I completed a great number of introductory modules that can be broadly described as falling within the fields of Social Anthropology, Archaeology, and Biological Anthropology. I chose to specialise in the latter as I realised quite early that my interests lie primarily within that area of knowledge. For my dissertation I researched artificial cranial deformation in some archaeological populations of Northern Chile. This is a cultural practice in which the head shape of a new-born is modified to achieve a certain desired morphology by means of bandages, boards, stones, pads, or a combination of these applied to the baby’s skull. Writing my dissertation was a great experience not only because I had the opportunity to work on such an interesting topic, but also because it provided me with a solid background in anatomy, multivariate statistics and digitization technologies. What was particularly enriching about my undergraduate experience is that I had the chance to volunteer for a couple of months each summer at Gustavo Le Paige Archaeological Museum, located in San Pedro de Atacama. This small city is placed within the Atacama Desert (the driest on earth!) and surrounded by an incredible natural beauty. During my undergraduate years I also had the chance to visit and work with museum collections such as the ones housed in the Musée de l'Homme (Paris), the Russian Institute of Archaeology (Moscow), and Musée d'Anthropologie préhistorique (Monaco). This was possible because my dissertation was part of a much bigger research project that had the funding to cover such travel expenses. These experiences also opened my eyes to the possibility of studying abroad and widening my research networks beyond my own country.

After that I moved to the UK funded by the Chilean National Research and Development Agency. I completed an MSc in Anatomy and Evolution at the University of York where I developed my virtual anthropology skills, which also sparked a profound interest in primate and mammalian evolution in general. I then chose to pursue a PhD in Adaptive Organismal Biology at the University of Manchester, where I combined all my academic interests such as functional morphology, primate evolution and macro-evolutionary studies. I also took part of a short Postdoc studying hand evolution in apes and monkeys, before moving to my current position at Oxford, which is a Leverhulme Early-Career Fellowship where I am a member of the Primate Models for Behavioural Evolution Lab. Here I’ve had the unique opportunity to visit Gorongosa National Park, Mozambique, where I work within the Paleo-Primate Project.

I have really enjoyed and profited from being trained by undergraduate, graduate and postdoctoral mentors with disparate and dissimilar expertise at different institutions, which has helped me to incorporate their vast and diverse expertise into my own work. Moving between different teams (and countries) has been very important to me, as it has allowed me to continue to do exciting, cutting-edge work and it is something I would really recommend.