Shirley Strum: "Do baboons make mistakes and how could you tell in the real world?" 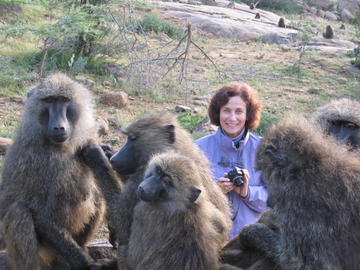 Shirley Strum is a Professor of Anthropology at the University of California, San Diego, and the Director of the Uaso Ngiro Baboon Project (UNBP) in Kenya. She has been funded by many agencies including the National Science Foundation, Wenner Gren, LSB Leakey Foundation, and the African Conservation Fund. Strum has spent over 47 years studying baboons in Kenya with a particular interest in the socio-ecological process of adaptation and most recently what we can learn about it during the Anthropocene. UNBP has intensive and extensive data on changing environments and their impacts on baboon diet, condition, reproduction and behavior. Her research was the first to uncover social complexity in nonhuman primates, to document the evolution of baboon hunting behavior, to study the development of crop-raiding behavior, and to successfully translocate 3 troops of baboons. She recently documented the invasion of an exotic plant (Opuntia stricta) and identified the ecological and human factors that led to its success. The ongoing research follows two directions. The first explores how socio-ecological complexity influences individual behaviors and how group level phenomena emerge from individual action. The second focuses on conservation using science to understand specific problems as well as to create innovative solutions. UNBP was the first primate project (1981) to use para-behaviorists and para-ecologists. Today the all-Kenyan field staff collect demographic, ranging, feeding, and social data. She is widely published in the academic literature, and has also authored a well-regarded popular book Almost Human: a journey into the world of baboons, and edited Natural Connections: perspective in community-based conservation; Primate encounters: models of science, gender and society; and The New Physical Anthropology: science, humanism and critical reflection. The study baboons are featured in numerous award-winning documentaries including David Attenborough’s Life of Primates and the Discovery Channel’s Baboon Tales.