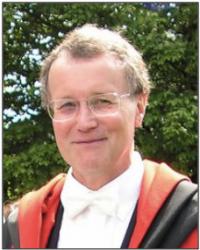 Professor Byrne’s work focuses on the evolution of cognitive and social behaviour, particularly the origins of distinctively human characteristics. He has published 150 journal papers and 70 invited book chapters. He is a founder-member of the Scottish Primate Research Group, and is a Fellow of the Royal Society of Edinburgh.

Talk abstract: The evolution of human language presents the greatest challenge for cognitive biology. Language is accepted as our most critical cognitive ability; and it is just too complex to have evolved in a single step, so precursors shared with non-human primates are to be expected. Ape gestures ‘bridge’ the gap’ between animal signals and human language. Professor Byrne will explain some of the findings from recent studies of gesture in chimpanzees, gorillas, bonobos and orangutans, both in captivity and under natural conditions in the field. Particular emphasis will be given to what gestures mean; whether series of gestures have syntactic structure, in which the meaning depends on the organization; and how ape repertoires of gesture develop: are they acquired culturally by imita4on, or what? A picture is emerging of a communication system with puzzling properties, whose eventual decipherment will give a solid basis for understanding how the ‘great leap’ of acquiring language took place.